It was nice to wake up this morning to this pleasant surprise: Polymer Clay Daily featured the work of Annette Kruger based on my tutorial Openwork Pendants. 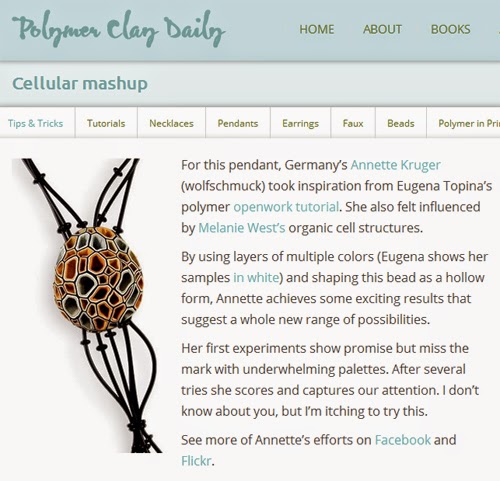 Annette's creation is so beautiful!  I absolutely love how she mixed my technique with Melanie West's ideas and came up with her own amazing piece.

Seeing how other polymer clay artists are developing my ideas is one of the greatest pleasures of teaching.
No comments:

I was very excited to see the works of Linda Britt, which she did following my tutorial Openwork Pendants.

On her blog, lindabrittdesign.blogspot.com, Linda shares a number of her creations in this technique, including beads, necklaces and bracelets.

Each of them is interesting in its own way.  I especially enjoyed seeing how Linda is experimenting with this technique, coming up with her own designs and new uses for the openwork elements.

I had difficult time deciding which picture to show in my blog.  Finally I chose this one, because the pendant on the left is my absolute favorite of her works in this style so far.  There is something magical about it!  I hope Linda will continue working in this technique.

By the way, Linda mentioned in her post that she had to be extra patient with this technique.  There is a waiting step, which she said took her much longer than stated in my tutorial.  After a short discussion, I think we figured out what happened.  I hope Linda will try it again and report her results when she has a chance.  Meanwhile I want to stress out that it is important to follow the procedures described in the tutorial exactly as  written (especially for that tricky step).  They are there for good reasons!

Thanks to Linda, I already edited my tutorial and added an explanation for each step.  I realized, if I explain not only what needs to be done, but also why is that so, than people will more likely pay attention to these particular instructions.  I still need to figure out how to notify everybody who bought the tutorial so far about this edition.